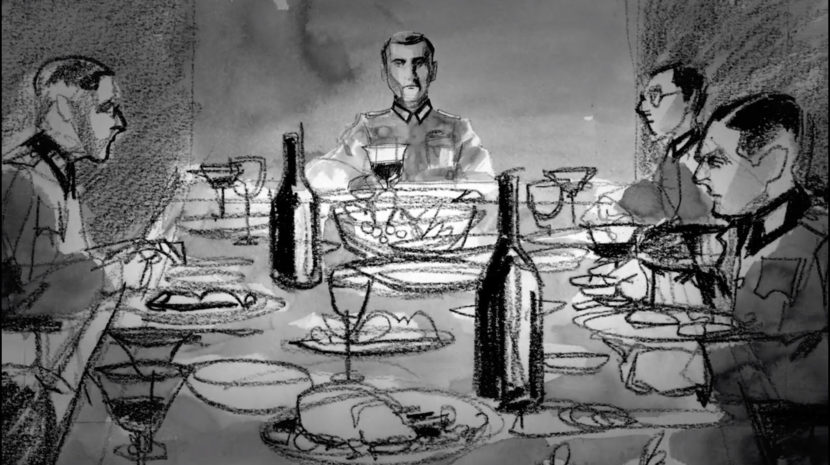 “An Inconvenient Time” tells the story of one person’s account of the holocaust.

Ruth Ravina was two years old when Germany invaded Poland in 1939, and she lived through three concentration camps by the time she was seven. Her story is one of survival,  and ultimately, one of triumph.

For their B’not Mitzvah project, Evie and Rebecca Klein – “twinned”, with holocaust survivor grandma Ruth, in order to learn of her most historic, tragic, as well as successful story.  The twins agreed to become witnesses to Ruth’s story in the year 2045 (one hundred years after the end of World War II). Evie and Rebecca’s father filmmaker Denny Klein saw the video tape from the twin’s first conversation with Ruth, and was inspired to share Ruth’s incredible story with the world. Klein recounts, “It was as if  God tapped me on the shoulder and said, ‘You must to do this!’”

Six years of interviews and conversations between Ruth, the twins, and the filmmakers. It is a testament to the fortitude of the Jewish people who survived hate, horror, hardship, and ultimately arrived at resurgence. Ruth built a beautiful, successful life for herself in New Jersey. She volunteered her time to various causes, and in so doing, was also able to share her story with children in schools, synagogues, and community centers.

By their accounting, and the passing on of this most powerful story, the filmmakers have become witness to Ruth’s story, as it is told to their audience. And so, the filmmakers pass Ruth’s story on, and her story, and her life’s lessons live on. May we never forget what happened during the holocaust, and may all learn compassion from this film, and ultimately eradicate these chapters once and for all from the annals of history, in order to pass on Ruth’s legacy of survival.

A member of SAG since 1968 as a child actor; Denny studied music, filmmaking, theater, arts, and multi-media at the College of Marin and Sonoma State University. This was followed by a stint in Hollywood, California, where he was apprenticed at ‘Theater East’ for three years; thus becoming a starving artist, working all sorts of jobs in Production, while making TV commercials, and waiting tables in restaurants. In 1981; when he finally decided eating was a good idea, he went into the family ‘Insurance Business’ in New Jersey. He’s been making documentaries since 2012, and loves composing music as well as play various instruments, happily married for 25 years to his wife Cathy. They have three kids; Joey, and the twins: Evie and Rebecca.